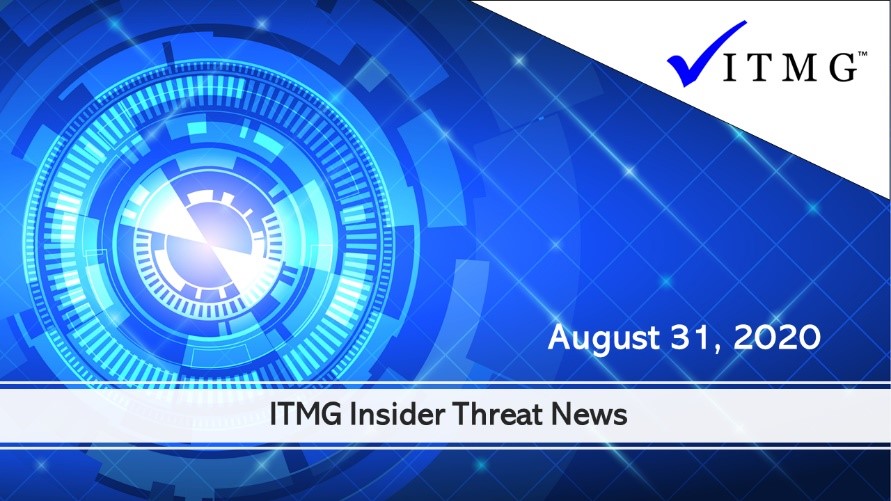 The federal insider threat technology market is expected to exceed $1B in fiscal year 2020 driven by agencies’ spending on cybersecurity tools and services designed to detect and monitor malicious behavior in data use and employee networks, Bloomberg Government reported Thursday. The report said the departments of Defense, Veterans Affairs, Health and Human Services and Homeland Security are the top four agencies that are procuring insider threat-related services and technologies, accounting for more than 66 percent of annual insider threat-related contract obligations.

Fox News senior judicial analyst Andrew Napolitano discusses McDonald’s lawsuit against its former CEO Steve Easterbook which accuses him of lying about sexual relationships he had with employees, calling it an ‘enormous embarrassment’ for the company. Then he later talks about Fortnite’s lawsuit against Apple and Google. McDonald’s Corp. said its continuing investigation into former CEO Steve Easterbrook’s conduct is examining whether he covered up improprieties by other employees alongside allegations of potential misconduct within the human-resources department. McDonald’s filed suit against the former CEO following a tip that board chairman Rick Hernandez received last month about an alleged sexual relationship between Mr. Easterbrook and an employee. That tip also raised concerns about the HR department and possible improprieties by other employees, McDonald’s executives said. The company declined to provide details on allegations that it said involved the HR department.

What are current trends for ransomware attacks in 2020? How has Covid-19 impacted these cyberthreats? What are the warning signs to watch out for? Let’s explore. After 2019 was remembered as the year that ransomware targeted state and local governments, what can be said about ransomware in 2020 – especially during the global coronavirus pandemic? To start, ransomware made global news headlines this week when a major ransomware attack was thwarted against Tesla. The Associated Press reported that: “Tesla CEO Elon Musk solved a mystery involving a 27-year-old Russian, an insider at an unnamed corporation and an alleged million-dollar payment offered to help trigger a ransomware extortion attack on the firm. …”

Q&A: What Has the Pandemic Taught Us About Security Priorities?

A crisis, like the one on the scale of the novel coronavirus, reshapes business priorities and exposes vulnerabilities. Notably this includes cybersecurity, as a leading expert considers. To look into the issue further, Digital Journal spoke with Doug Wick, VP of Products at ALTR, to see what the coronavirus pandemic has taught the industry about security priorities and the enterprise’s needs. DJ: How seriously should businesses be taking the threat from insiders? Wick: These days the insider threat is the thing that keeps both physical and cybersecurity leaders alike awake at night. Good communication and information sharing across those functions is key, as precursors to a breach might be spotted first in either realm, or by looking at information from both together.

A U.S. Justice Department Initiative Seeks to Stem the Hemorrhaging

U.S. trade secrets are being stolen by Chinese espionage at an alarming rate, and a Justice Department initiative is focusing on stopping the stealing. While cyber espionage is well known and hugely effective, the insider threat has shown to be equally damaging as the Middle Kingdom fuels its economic and military sectors with state-of-the-art U.S. technology. The past two years has seen a pronounced increase in China’s state-sponsored theft of trade secrets, reports Jay I. Bratt, chief of the counterintelligence and export control section in the National Security Division of the Justice Department. China is actively seeding academia and research institutes with people who would have an incentive to provide technology, and it has aggressively targeted former members of the U.S. intelligence community who have not been successful in their private sector lives.

A federal magistrate judge in Virginia has refused to free a former Army Green Beret who was arrested last week on a charge that he divulged U.S. military secrets to Russian intelligence agents. U.S. Magistrate Judge John Anderson agreed with federal prosecutors that Peter Rafael Dzibinski Debbins, 45, poses a risk to flee if he is released from custody before trial. Anderson said Justice Department prosecutor Thomas Traxler adequately explained why more than a year elapsed between the start of the investigation and Debbins’ arrest last Friday.

Insider risk is one of the costliest types of data breaches. So said Ran Pugach, chief product and development officer at Ava Security, speaking during the ITWeb Security Summit 2020 yesterday. The event was held virtually. He noted that organisations must strengthen their defences against insider risk with human-centric security. “The rationale there is that securing an organisation starts with securing your people. You must be able to understand human and behavioural patterns to be able to protect against insider risks,” Pugach said. “When we talk about insider risks, people sometimes jump to the conclusion of employees trying to steal data or malicious employees.” However, it is important to note that there are negligent and accidental behaviours that expose the organisations to cyber attacks. “This involves employees that are not technical experts either using a USB stick or using unsecured WiFi networks; not being aware of the actual risk they will be exposing themselves to.”

On August 12, 2020, John Demers, the head of the National Security Division (NSD) at the Department of Justice (DOJ), spoke publicly about national security threats from China at an event sponsored by the Center for Strategic and International Studies in Washington, DC. In more candid remarks than typically provided in a public forum, Mr. Demers concentrated on China’s efforts to steal U.S. intellectual property (IP) from U.S. companies and other institutions, and how DOJ’s “China Initiative” seeks to counter this threat.

The novel coronavirus has hastened a trend toward remote work that was already years in the making. Before the pandemic, many employees worked off-site at least once a week. Now that number is soaring, and PwC estimates that 72% of workers would like to continue working remotely even after the pandemic subsides. In many ways, this is excellent news. While remote workers face a unique set of challenges, they generally report being happier and healthier, and they tend to stay with a company longer than when they work in an office.

Categories: ITMG News | Tags: Insider Risk Management, itmg, and news
This entry was posted on Monday, August 31st, 2020 at 11:19 am. Both comments and pings are currently closed.