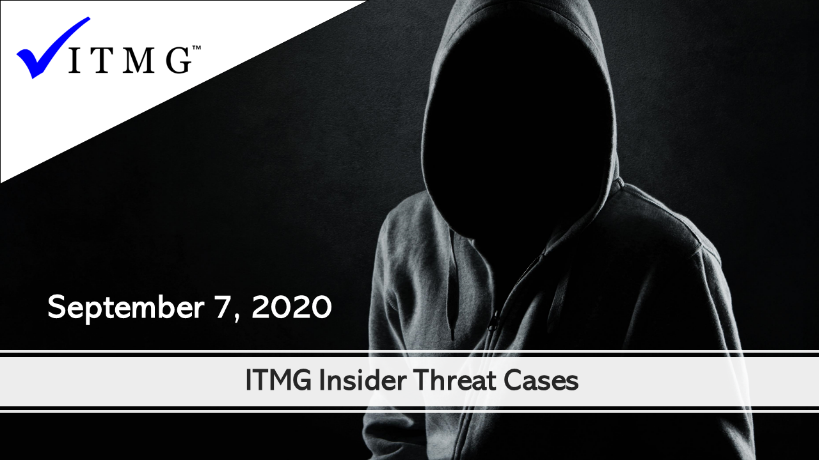 A federal grand jury in the District of Nevada returned an indictment yesterday charging a Russian national for his role in a conspiracy to intentionally cause damage to a protected computer. Acting Assistant Attorney General Brian C. Rabbitt of the Justice Department’s Criminal Division, U.S. Attorney Nicholas A. Trutanich of the District of Nevada, and Special Agent in Charge Aaron C. Rouse of the FBI’s Las Vegas Field Office made the announcement. The indictment alleges that Egor Igorevich Kriuchkov, 27, a citizen of Russia, attempted to recruit an employee of a company located in Nevada, with the purpose of introducing malicious software into the company’s computer network, extracting data from the network, and thereafter extorting ransom money from the company under the threat of making the extracted data public.

Federal authorities this morning arrested four defendants across the country on charges alleging a civilian employee of the United States Navy downloaded technical drawings and manuals related to U.S. military weapons systems and sold the items to a Newport Beach company, which later resold the documents to domestic and foreign customers. The arrests were made pursuant to a criminal complaint filed in United States District Court in Los Angeles that charges all four defendants with theft of government property. The affidavit in support of the complaint alleges that the thefts have been occurring since at least 2012, and possibly since 2008. The investigation started when military investigators began looking at Fitting in relation to claims that he “was interfering with the quality assurance process for aircraft canopies intended for use in U.S. military aircraft,” according to the affidavit. The agents with the Defense Criminal Investigative Service (DCIS) and the Naval Criminal Investigative Service (NCIS) discovered two dozen emails from Fitting’s Navy email account to Erice’s Gmail account, all of which contained government-controlled technical drawings or manuals related to various military weapons systems, including aircraft.

Hao Zhang was sentenced yesterday to eighteen months in prison and ordered to pay $476,835 in restitution following his conviction at trial on charges of economic espionage, theft of trade secrets, and conspiring to commit both offenses, announced United States Attorney David L. Anderson and Federal Bureau of Investigation Special Agent in Charge John F. Bennett. “I am gratified by a sentence that recognizes the seriousness of the offense,” said U.S. Attorney David L. Anderson for the Northern District of California.  “Command-and-control countries cannot match the innovation of a free nation, and inevitably resort to theft.  We will protect Silicon Valley.  We will protect our intellectual property.” “Hao Zhang committed these acts to benefit himself, his co-conspirators, and the government of China. This is not competition – this is economic espionage, theft, and conspiracy,” said FBI Special Agent in Charge Bennett. “The FBI will not allow American research and development to be stolen. We encourage companies to come to us both proactively and when suspicious activity is observed so that we can work together to protect American businesses and ensure our national economic security.”

Cerissa Renfroe Neal, 45, of Madison County, David B. Hunt, 54, of Jackson, Tennessee, Joseph Kyles, 51, of Memphis, Tennessee, and Lambert Martin, 59, of Memphis, Tennessee, have been charged in a federal indictment with conspiracy, wire fraud, money laundering and bribery, announced United States Attorney Mike Hurst, Special Agent in Charge Michelle A. Sutphin with the Federal Bureau of Investigation in Mississippi, Special Agent in Charge Neil E. Sanchez with the U.S. Department of Education, Office of Inspector General, and Mississippi State Auditor Shad White. The indictment, returned by a federal grand jury on February 25, 2020, and recently unsealed by a federal court, charges Cerissa Renfroe Neal, the former Executive Director of the Mississippi Department of Education (“MDOE”), along with her co-defendants Joseph B. Kyles, David B. Hunt, and Lambert Martin, with one count of conspiracy to commit wire fraud and seven counts of wire fraud. The indictment also charges Neal and Kyles with one count of money laundering.  Finally, Neal and Kyles are each also charged with three counts of bribery.

An indictment was unsealed today in federal court in Central Islip charging Gregory Settino with theft of medical products and making a false statement to a federal agent.  Settino was arrested today and arraigned this afternoon via teleconference before United States Magistrate Judge Arlene R. Lindsay. Settino was released on a $250,000 bond. Seth D. DuCharme, Acting United States Attorney for the Eastern District of New York, and Jeffrey Ebersole, Special Agent-in-Charge, Food and Drug Administration, Office of Criminal Investigations, New York Field Office (FDA-OCI), announced the arrest and charges. “As alleged, Settino abused his supervisory position at a pharmaceuticals company to steal large quantities of equine drugs in order to enrich himself and without regard for how his sale of the medical products could potentially endanger the health of horses,” stated Acting United States Attorney DuCharme.  “The defendant then allegedly compounded his criminal conduct by lying to an FDA Special Agent to minimize the scope of his thefts.  Thanks to the combined efforts of the U.S. Attorney’s Office and the FDA, this illicit pipeline of stolen drugs to vets and horse trainers has been shut down.”

BRIAN WADE EDDY, 49, of Oklahoma City, Oklahoma, pleaded guilty today to accessing and viewing images of child pornography from his government-issued laptop. On May 21, 2020, Mr. Eddy was charged by criminal complaint with using his laptop computer with the intent to view child pornography.  The affidavit filed in support of the criminal complaint indicates Mr. Eddy accessed websites suspected to contain child pornography on December 1, 2019.  On June 17, 2020, a federal grand jury sitting in the Western District of Oklahoma returned a one-count Indictment that charged Mr. Eddy with knowingly accessing, with intent to view, child pornography. This afternoon, Mr. Eddy pleaded guilty before U.S. District Judge Joe Heaton to the charge alleged in the Indictment.  As part of his plea, Mr. Eddy admitted that he searched for and viewed images of child pornography from his government laptop in December 2019. According to the United States Air Force Office of Special Investigations, at the time of the incident Mr. Eddy was a civilian employee at Tinker Air Force Base, and has since been terminated.  He was also a ranking Colonel in the Air Force Reserves.  Mr. Eddy currently remains in federal custody while he awaits sentencing.  He faces up to 10 years in prison, a $250,000 fine, at least five years of supervised release, and a $22,100 special assessment.  Sentencing will take place in approximately 90 days.

A former Mesa Airlines employee pleaded guilty today to a federal criminal charge that he schemed to manufacture counterfeit Mesa employee identification badges that were used to obtain free flights for himself and others on another airline. Hubbard Bell, 32, of Houston, Texas, pleaded guilty via videoconference to one count of conspiracy to commit wire fraud. According to his plea agreement, Bell worked at Mesa Airlines, a Phoenix-based regional airline, from June 2015 until October 2015. While a Mesa employee, Bell was provided access to free tickets as a job benefit. Mesa employees and their designated beneficiaries were permitted to use this benefit only while employed by Mesa Airlines. Bell admitted that, from February 2016 to November 2017, after Mesa terminated his employment, he conspired with others to sell the stolen and unauthorized information of Mesa employees, including their names, dates of hire, and employee identification numbers that were needed to book free flights on Spirit Airlines through Spirit’s web portal for themselves and others.

A former bank president admitted in federal court on Wednesday that he embezzled from the Kentucky bank where he was the president. Thomas Hinkebein, 59, pleaded guilty to one count of embezzlement by a bank officer, before United States District Chief Judge Danny C. Reeves.  Hinkebein admitted that, between January 12, 2016 and August 13, 2018 and while he was the President of Whitaker Bank, he willfully misapplied assets of the bank.  Specifically, he admitted stealing golf carts and other property of Andover Country Club, an asset owned by Whitaker Bank, and seeking reimbursement from Whitaker Bank for a variety of personal expenses, including cell phone plans, gym memberships, fuel purchases, vehicle repairs, technology purchases for his family members, shipping expenses, and landscaping at his home. To hide the personal nature of these expenses, the Defendant falsely reported many of the expenses to Whitaker Bank to make them appear to be legitimate work expenses.

A former Illinois accountant has been sentenced to more than 16 years in federal prison for misappropriating more than $77 million from individuals and financial institutions. SULTAN ISSA, 47, of Hinsdale, pleaded guilty earlier this year to wire fraud affecting a financial institution.  U.S. District Judge Andrea R. Wood imposed the 200-month sentence Monday in federal court in Chicago.  Judge Wood also ordered Issa to pay more than $72 million in restitution to the victims. Issa was a certified public accountant and the Chief Financial Officer of a group of partnerships, corporations, and trusts owned by a Chicago-area family.  From 2010 to 2017, he embezzled at least $45 million of the family’s assets, including money Issa stole from a trust account that was set up to pay medical expenses for a family member suffering from an incapacitating illness.  Issa also fraudulently obtained at least another $5.1 million from individuals in his personal capacity, claiming he would invest their money in legitimate opportunities, including a luxury auto dealership Issa owned in Burr Ridge.

Former Horry County IT Security Director Sentenced to Two Years in Federal Prison for Theft of More than $340,000 in Government Funds

United States Attorney Peter M. McCoy, Jr., announced today that Terry Shawn Petrill, 48, of Myrtle Beach, was sentenced to two years in federal prison and ordered to pay back more than $340,000 after pleading guilty to theft of federal funds. “Those who steal from our local governments are raiding the South Carolina taxpayers,” said U.S. Attorney McCoy. “This is unacceptable, and as this case shows we will seek prison time and restitution against those who engage in such theft. I appreciate the dedicated work of our law enforcement partners and government officials in Horry County who provided critical assistance in this case.” Evidence presented to the court showed that beginning on June 11, 2015, through August 23, 2018, Petrill ordered forty-one Cisco 3850 network switches that were to be installed on the Horry County network.  During this time period, Horry County received federal program funding. When the switches would arrive, Petrill advised that he would handle the installation. Petrill did not install the switches on the network and instead sold them to third parties and kept the proceeds for himself.

A former PG&E employee pleaded guilty today to one count of conspiracy to commit honest services wire fraud and admitted to receiving kickback payments from a Stockton transportation company owned by his cousin, U.S. Attorney McGregor W. Scott announced. According to the plea agreement, Ronald S. Schoenfeld, 65, of Goodyear, Arizona, formerly of Dublin, California, while employed at Pacific Gas and Electric Company, conspired to obtain contracts from PG&E for his cousin’s transportation business in exchange for kickbacks from that business worth approximately 2.5% of the value of the contracts. Schoenfeld concealed from PG&E his familial relationship with his co-conspirator from PG&E, provided confidential information to his co-conspirator, and, at times, directly intervened in the consideration of contracts between PG&E and his co-conspirator’s business, all contrary to PG&E’s policies.

Categories: Insider Threat Cases | Tags: cases, Insider Risk Management, and itmg
This entry was posted on Tuesday, September 8th, 2020 at 11:39 am. Both comments and pings are currently closed.