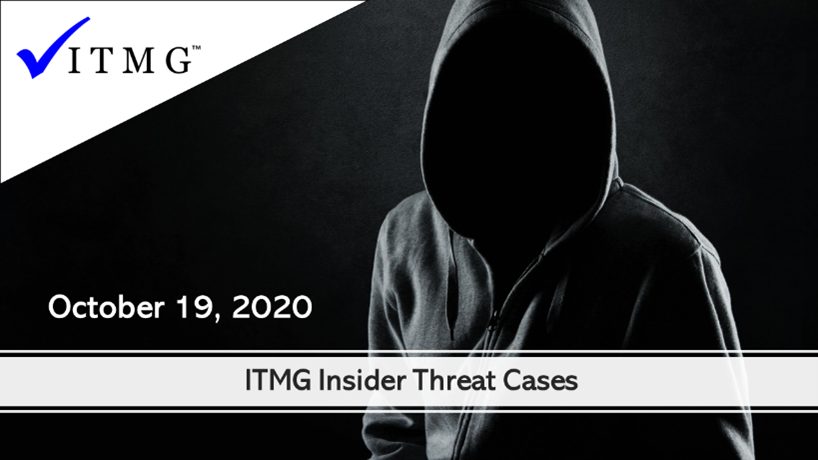 NEW ORLEANS –  U.S. Attorney Peter G. Strasser announced that CARLOS DAVID IRIAS, age 47, a resident of Cutler Bay, Florida, was sentenced to two (2) years probation by United States District Judge Eldon E. Fallon after previously pleading guilty to a one-count bill of information charging him with intentionally accessing a protected computer without authorization and recklessly causing damage resulting in loss to Company A, a company in New, Orleans, Louisiana that previously employed IRIAS, of more than $5,000 during one year, in violation of 18 U.S.C. ” 1030(a)(5)(B) and 1030(c)(4)(A).  Judge Fallon also ordered IRIAS to pay restitution in the amount of $14,593 to Company A. According to court documents, from about 2012 until August 14, 2017, IRIAS worked for Company A, which was in the business of developing and distributing specialized urological medical devices including scopes and laser fibers.  IRIAS was responsible for designing marketing templates, coordinating sales, and developing client contacts.  IRIAS terminated his employment with Company A on August 14, 2017, after which time he was no longer authorized to access Company A’s cloud-based server, which handled marketing-related functions, including storing email contact lists and marketing templates and brochures.

HOUSTON – A 45-year-old Katy man has entered a guilty plea to embezzling over $2 million from a local oil services company, announced U.S. Attorney Ryan. K. Patrick. Robert Andrew Bishop was the vice president of resource management at International Professional Management (IPM), an oil services company located in Houston. As part of his duties, he was in charge of securing short term loans to cover IPM’s monthly operating capital. Today, he admitted he would inflate the loan amount needed and then divert the excess money to fake vendor accounts he controlled. Over the span of approximately six years, Bishop diverted roughly $2.1 million from the company’s operating expenses. The owners of IPM discovered his fraud scheme in August 2019.

PORTLAND, Ore.—A former U.S. Postal Service employee was sentenced to federal prison today for stealing mobile phones out of packages at the Portland postal sorting facility, announced U.S. Attorney Billy J. Williams. “It is imperative that the community has confidence and trust in the integrity of the U.S. Postal Service” said United States Attorney Billy J. Williams “Thanks to the dedicated efforts of the U.S. Postal Service Office of Inspector General, this defendant is held to account for violating that trust.” According to court documents, beginning in about August, 2019, Alvarez, an employee of the United States Postal Service, began stealing smartphones placed into the mail for delivery to customers.  Over the course of the next three months, Alvarez stole more than 400 phones, by surreptitiously opening the box as it passed his mail sorting station, removing the phone, and then sending the empty package on for delivery to the intended recipient. On the day he was caught by OIG Special Agents, he had over a dozen stolen phones in his possession. When interviewed, Alvarez admitted to stealing high end, recently released, smartphones, which he subsequently sold for his own profit.

American Contractor Pleads Guilty to Conspiracy to Steal Government Equipment from U.S. Military Base in Afghanistan

An American military contractor pleaded guilty today to her role in a theft ring on a military installation in Kandahar, Afghanistan. Acting Assistant Attorney General Brian Rabbit of the Justice Department’s Criminal Division, U.S. Attorney G. Zachary Terwilliger of the Eastern District of Virginia, and Special Inspector General for Afghanistan Reconstruction (SIGAR) John F. Sopko made the announcement. Varita V. Quincy, 35, of Snellville, Georgia pleaded guilty before U.S. Magistrate Judge Douglas E. Miller to one count of conspiracy to defraud the United States and one count of making false official statements.  Sentencing is set for Feb. 23, 2021 before Judge Rebecca Beach Smith. Quincy admitted that, between April 2015 and July 2015, she, Larry J. Green of Chesapeake, Virginia, and others conspired to steal, and did steal, equipment and property of value to the United States while working for a government contractor operating on Kandahar Airfield, in Kandahar, Afghanistan.  Kandahar Airfield was used by U.S. military forces to support U.S. military missions throughout Afghanistan.

Former Office Manager Sentenced To More Than 5 Years In Federal Prison For Stealing $790,600

Orlando, Florida – U.S. District Judge Paul G. Byron has sentenced Richard Barrett Dale Walker (38, The Villages) to five years and five months in federal prison for wire fraud and bank fraud. Walker was also ordered to pay $790,600 in restitution and an $839,305.30 forfeiture order. According to court documents, Walker was the part-time office manager of a locally owned business where he worked 10 hours a week and was responsible for paying bills and managing the finances of the business. He was paid $500 per week. Walker also had two companies of his own: RBD Distributors LLC and Shotgun Shooting Supply LLC. Walker’s scheme consisted of two parts. First, from January 2014 to July 3, 2018, Walker used the business’s bank account, without authorization, to write $751,824.29 in checks to himself and his two companies. In total, there were more than 500 checks, ranging from $145.89 to $16,981.03, each of which included the forged signature of the owner of the business.  The second part of the scheme occurred from March 19 to July 3, 2018.  During that time period, Walker used the business’s personal and corporate credit cards to charge $301,328.65 in fraudulent/unauthorized credit card transactions that were paid to Walker’s company, RBD Distributors. Walker sometimes paid for those credit card transactions by writing a check or initiating a transfer from the business’s bank account.

Greenbelt, Maryland – Former Correctional Dietary Officer Chanel Pierce, age 27, of Pikesville, Maryland, pleaded guilty today to a federal racketeering conspiracy in connection with her work at the Jessup Correctional Institution (JCI).  The conspiracy included former correctional officers, inmates, and outside “facilitators,” for paying bribes to correctional officers to smuggle contraband, including narcotics, alcohol, tobacco, and cell phones into the prison. The guilty plea was announced by United States Attorney for the District of Maryland Robert K. Hur; Special Agent in Charge Jennifer C. Boone, of the Federal Bureau of Investigation, Baltimore Field Office; and Secretary Robert Green, of the Maryland Department of Public Safety and Correctional Services. “Corrupt correctional officers endanger the lives of their co-workers and of the inmates entrusted to their care and supervision,” said United States Attorney Robert K. Hur.  “They also endanger the entire community, as prisoners can use contraband cell phones to direct criminal activity outside prison walls.  The United States Attorney’s Office will continue to work with our law enforcement partners to root out prison corruption and prosecute correctional officers who abuse their positions of trust to facilitate and engage in criminal behavior.”

LOS ANGELES – A former member of two white supremacist organizations has agreed to plead guilty to a felony charge that he failed to disclose his past membership in two hate groups in order to obtain a security clearance and employment at a defense contractor. Decker Hayes Ramsay, 23, of Rolling Hills, agreed to plead guilty to a single-count information charging him with making false statements. Ramsay’s plea agreement was filed today in United States District Court. According to his plea agreement, in April 2018, Ramsay knowingly and willfully made a materially false statement on an Electronic Questionnaire for Investigations Processing (e-QIP), which is used by the United States Office of Personnel Management’s National Background Investigations Bureau as part of its background investigation of prospective federal employees and contractors. Ramsay submitted an e-QIP as part of his application for employment at a defense contractor, named in court documents as Company 1, a job that required him to obtain a national security clearance.

DUBLIN, GA:  A Georgia Department of Corrections officer and her convicted-felon boyfriend were sentenced to federal prison for possession of drugs packaged for smuggling into prison. Lekesia Lashea Harden, 23, of Dublin, was sentenced in U.S. District Court to 10 years in prison by Judge Dudley H. Bowen, said Bobby L. Christine, U.S. Attorney for the Southern District of Georgia. A jury in October 2019 convicted Harden on one count of Possession with Intent to Distribute Marijuana and Methamphetamine after a two-day trial. Tremayne O. Linder, 31, of Dublin, who pled guilty to the same charge, previously was also sentenced to 10 years in prison. After completion of their prison terms, Harden must serve five years on supervised release, and Linder must serve three years. There is no parole in the federal system. “As a correctional officer, Lakesia Harden knew what she was doing when she engaged in drug trafficking and associated with Tremayne Linder, a convicted felon,” said U.S. Attorney Christine. “Both of them will now spend substantial time in federal prison for their crimes.” According to court documents and testimony, Harden worked as a correctional officer for the Georgia Department of Corrections (GDC) at Wheeler Correctional Facility, a medium-security, privately owned state prison in Alamo, Ga. Linder was on probation for a felony conviction on state charges when officers from the Dublin Police Department and Georgia Department of Community Supervision visited Harden and Linder’s residence April 9, 2018, to serve Linder with an arrest warrant for failing to complete the requirements of probation.