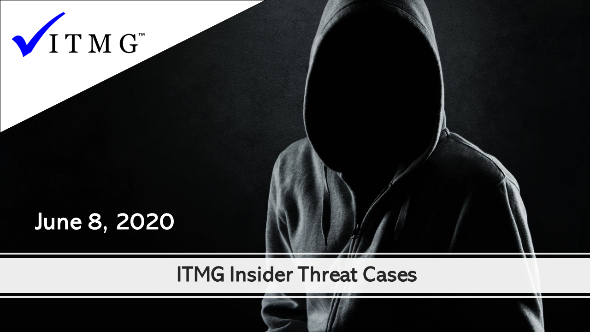 A Nebraska man today admitted engaging in fraudulent activity that exposed his employer’s confidential information, U.S. Attorney Craig Carpenito announced. Timothy Young, 50, of Moorefield, Nebraska, pleaded guilty by videoconference before U.S. District Judge Katharine S. Hayden in Newark federal court to an information charging him with wire fraud. Young was employed at a data analytics and risk assessment firm based in New Jersey. The company serves customers worldwide, including entities providing insurance and financial services as well as government entities. The company maintains a network that houses, among other things, significant amounts of personally identifiable information. Without the firm’s approval, Young obtained confidential, non-public information that belonged to the firm. The information included names, logon names, passwords, email addresses, and telephone numbers for some of the company’s clients. Young then attempted to sell the information.

A former administrative employee of a medical marijuana clinic and several other clinics was recently sentenced to serve time in federal prison after pleading guilty to identity theft and wire fraud. The case illustrates the potential risks posed by employees inappropriately using personal devices – a risk that could potentially be heightened with more staffers working at home during the COVID-19 crisis. Stacey Lavette Hendricks of Leesburg, Florida, was sentenced to serve concurrently two 24-month sentences after pleading guilty in January to one count of aggregated identity theft and one count of wire fraud, the Department of Justice says in a statement. In addition, Hendricks was also ordered to pay more than $22,000 in restitution to Carvana for cars she fraudulently purchased. Prosecutors alleged that she used her personal cell phone’s camera to take photos of dozens of patients’ information that she then used to make fraudulent purchases and also sold to others for $100 per image.

A 65-year-old Texas man has pleaded guilty to wire fraud in his connection to stealing millions from a Deer Park oil corporation, announced U.S. Attorney Ryan K. Patrick. James Arthur Camp, New Braunfels, admitted that from April 1998 through November 2017, he defrauded Lubrizol Corporation of $9,256,712.54. During the scheme, Camp submitted fraudulent invoices for laboratory services from two companies he owned, knowing they had not been performed.  Specifically, Camp admitted that one of those fraudulent laboratory charges included one from his company Bay Area Analytical in the amount of $2,774.06. Camp inputted the data into Lubrizol’s accounting system, causing it to be transmitted electronically from Deer Park to company headquarters in Wycliffe, Ohio. That fraudulent charge was then bundled with other similar charges and paid via electronic funds transfer to Bay Area Analytical’s bank account at J P Morgan Chase Bank in the amount of $12,294.23.

A former administrator at the Illinois Secretary of State’s office has been charged with fraud and theft of state resources totaling nearly $350,000.The U.S. Attorney for the Central District of Illinois said a federal grand jury returned an indictment against Candace Faye Wanzo of Centralia. Wanzo was hired as a private secretary in 1999, shortly after Secretary of State Jesse White was elected. That’s after Wanzo pleaded guilty in 1991 to stealing more than a quarter million dollars from Southern Illinois University. The Illinois Times reports she was paid an annual salary of $87,600 before she was terminated in 2018.

The first person ever convicted of economic espionage by a federal jury, for stealing manufacturing secrets from DuPont Co. and selling the information to Chinese-owned companies, has asked for early home release, saying he contracted COVID-19 in prison and is on a ventilator. Former businessperson Walter Liew, 62, said Friday that his age and underlying medical conditions, including high cholesterol and a fatty liver — a precursor to cirrhosis — put him at an elevated risk were he to get the virus again.

Managed threat hunting services can help take some of the pressure off security operations centres and help ensure potential breaches don’t escalate into something far worse. We explore one such case with a positive result. Insider threats, defined as risk posed by people with access to a company’s physical or digital assets either acting maliciously or negligently, is a pervasive problem in the world of cyber security, and one that it is impossible to fully stamp out. However, using a variety of techniques, it is possible to mitigate insider threats to some extent, as one unnamed EMEA-based consulting firm learned earlier in 2020, when through a combination of quick-thinking and collaboration with its technology suppliers, it successfully thwarted a cyber attack in real time, as it unfolded. The incident took place back in March, and thanks to the support the target received from its supplier, Palo Alto Networks, and its Cortex XDR Managed Threat Hunting (MTH) service, was able to head off the malicious insider before they could do any lasting damage.

Chinese automaker Xpeng is again being accused of copying Tesla. The company, which has an employee sued for alleged intellectual property theft from Autopilot, an autonomous steering system for models like the Model S, has a website that resembles – to say the least – that of Elon Musk’s company. The websites of the two companies feature a car positioned in the center of the photo with the name of each model just above. The images also highlight the sky, where the logo and the navigation bar appear, both in white. At the bottom are the highlights on vehicle specifications and rounded buttons.

Paul Patrick Piper, 58, of Ludington, Michigan, pled guilty today to a felony information dated February 21, 2020, setting forth criminal charges of bank fraud and federal income tax offenses. Piper’s guilty plea hearing took place in the United States District Court in Grand Rapids, Michigan, before Chief U.S. District Judge Robert J. Jonker. According to the felony information and plea agreement, Piper served for many years as the financial controller for Lake Michigan Carferry, the company operating the SS Badger ferry between Ludington, Michigan, and Manitowoc, Wisconsin. Piper defrauded various financial institutions and Lake Michigan Carferry in an amount between $550,000.00 and $3,500,000.00, by overriding normal accounting systems and writing checks directly to himself and to two of his affiliated businesses, Piper Tax & Accounting and Piper Group.

United States Attorney David C. Joseph announced that William Britt Harvey, 45, of Lecompte, Louisiana, was sentenced on June 3, 2020, by Senior U.S. District Judge Donald E. Walter to serve two years in federal prison and three years of supervised release following his prison term for stealing over $100,000 from a medical services company. Harvey was employed by LAI to maintain and repair x-ray equipment used by LAI in its medical imaging business. In order to perform his duties, which included purchasing equipment and supplies to maintain LAI’s imaging equipment, Harvey had access to LAI’s credit card and bank account information. Between December 2012 and October 2014, Harvey embezzled company funds from LAI through a scheme in which he illicitly transferred money to himself using numerous PayPal accounts, including accounts under the fictitious names of “Global Imaging” and “CFA.” In order to support his scheme, Harvey presented fake invoices to LAI from Global Imaging and CFA.