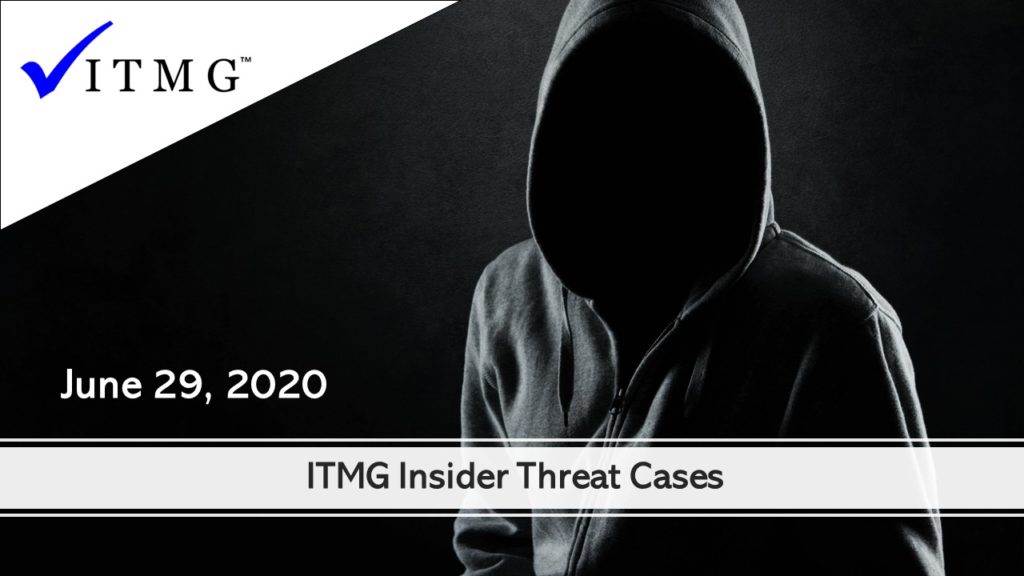 A former FBI special agent who worked for years in Chicago’s organized crime division has been charged with stealing sensitive government documents and hoarding them in his home after retirement. Yen Cham Yung, who achieved top government security clearance during his lengthy career, was arrested in Colorado earlier this week and is scheduled to be brought to Chicago to face the charges. Yung, 57, was accused in a criminal complaint unsealed Tuesday of illegally keeping hundreds of documents without consent, including sensitive information about undercover informants, surveillance of gang activity and email threads between FBI supervisors concerning organized crime investigations. The complaint also alleged Yung violated national security protocols by keeping a copy of a memorandum of understanding between the CIA and FBI “regarding the activities of those agencies overseas and domestically.”

Timothy J. Smith, 43, of Mobile, Alabama, was sentenced to 18 months’ imprisonment late Wednesday afternoon in the United States District Court in Pensacola on charges of theft of trade secrets and interstate extortionate communications. Lawrence Keefe, United States Attorney for the Northern District of Florida, announced the sentencing today. During the trial, a jury received evidence that Smith was a software engineer in Mobile, Alabama. StrikeLines, the victim in the case, is a Pensacola based company that uses commercial side scan sonar equipment to locate fishing reefs in the Gulf of Mexico and sells the coordinates using an interactive map on their website. StrikeLines also provides public coordinates for free to those interested in finding valuable spots to fish in the Gulf.

At an unusual in-person courtroom hearing Friday during the coronavirus pandemic, a federal judge in San Jose, California, announced the verdict against Hao Zhang. Arrested in 2015 when he flew to Los Angeles for a conference, Zhang was accused of conspiring with a colleague from the University of Southern California to steal and sell American secrets to the Chinese government and military through a shell company in the Cayman Islands. Hao Zhang arrives at federal court in San Jose, U.S., on Oct. 2, 2019. Zhang was charged during an aggressive U.S. crackdown on Chinese theft of intellectual property that began under former President Barack Obama has continued under the Trump administration, which has applied heavy scrutiny to Chinese scientists doing research in the U.S. He faces up to 15 years in prison for economic espionage and 10 years for theft of trade secrets, according to a court filing.

58-year-old Danielle Bulley may not look like your typical cybercriminal, but the act of revenge she committed against a company had just as much impact as a conventional hacker breaking into a business’s servers and causing havoc. As North Yorkshire police report, Bulley has been successfully prosecuted under the UK’s Computer Misuse Act after deleting thousands of important files from a company that went on to collapse. Once upon a time, Bulley was a director of a business called Property Press that produced a weekly property newspaper focused on south east Devon. At some point things turned sour, and Bulley resigned her position at the firm in 2018 before the company went into liquidation. However, fellow director Alan Marriott started a new business venture – without Bulley’s involvement – using the assets of the old firm. Things clearly didn’t sit well with Bulley after her departure from the business, and several months after her resignation she managed to gain unauthorised access to the new company’s Dropbox account. More than 5,000 documents were permanently erased, and the company claimed that the damage to business was so great that it could no longer operate, with people losing their jobs and a loss of almost £100,000.

A federal grand jury returned a second superseding indictment today charging Julian P. Assange, the founder of WikiLeaks, with offenses that relate to Assange’s alleged role in one of the largest compromises of classified information in the history of the United States. The new indictment does not add additional counts to the prior 18-count superseding indictment returned against Assange in May 2019.  It does, however, broaden the scope of the conspiracy surrounding alleged computer intrusions with which Assange was previously charged.  According to the charging document, Assange and others at WikiLeaks recruited and agreed with hackers to commit computer intrusions to benefit WikiLeaks. Since the early days of WikiLeaks, Assange has spoken at hacking conferences to tout his own history as a “famous teenage hacker in Australia” and to encourage others to hack to obtain information for WikiLeaks.  In 2009, for instance, Assange told the Hacking At Random conference that WikiLeaks had obtained nonpublic documents from the Congressional Research Service by exploiting “a small vulnerability” inside the document distribution system of the United States Congress, and then asserted that “[t]his is what any one of you would find if you were actually looking.”

Terming China the greatest threat to the US economy, the Federal Bureau of Investigation (FBI) said it is conducting more than 2,000 active investigations connected to the Chinese Communist Party. FBI Director Christopher Wray called China the greatest threat to the US economy and its democratic principles, Washington Examiner reported citing Fox News. “There’s no country that presents a broader, more comprehensive threat to America’s innovation, to our economic security, and to our democratic ideas than China does,” Wray said in an interview that aired Wednesday. “The FBI has over 2,000 active investigations that trace back to the government in China,” Wray said, noting that they represent “about a 1300% increase in terms of economic espionage investigations with a Chinese nexus from about a decade ago.”

The Department of Justice announced today the unsealing of an indictment charging Ethan Melzer, 22, of Louisville, Kentucky, for allegedly planning an attack on his U.S. Army unit by sending sensitive details about the unit – including information about its location, movements, and security – to members of an extremist organization named Order of the Nine Angles (O9A), an occult-based neo-Nazi and white supremacist group.  Melzer is charged with conspiring and attempting to murder U.S. nationals, conspiring and attempting to murder military service members, providing and attempting to provide material support to terrorists, and conspiring to murder and maim in a foreign country.  The FBI and the U.S. Army thwarted Melzer’s plot in late-May 2020, and the FBI arrested Melzer on June 10, 2020.  The case is assigned to U.S. District Judge Gregory Woods.