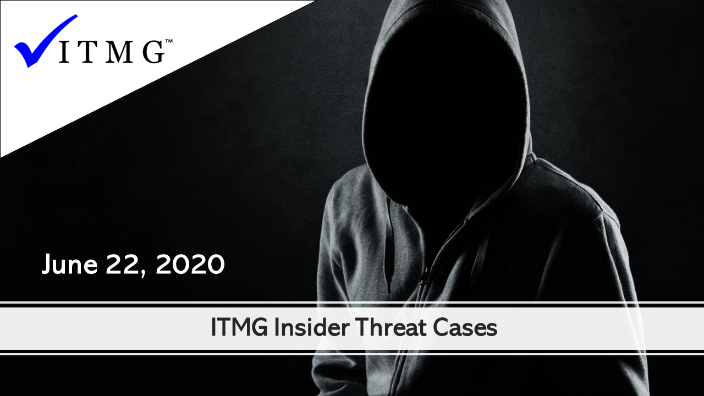 A former employee of the Defense Intelligence Agency (DIA) was sentenced today to 30 months in prison for leaking classified information to two journalists in 2018 and 2019. “Frese repeatedly passed classified information to a reporter, sometimes in response to her requests, all for personal gain,” said Assistant Attorney General for National Security John C. Demers.  “When this information was published, it was shared with all of our nation’s adversaries, creating a risk of exceptionally grave harm to the security of this country.  His conviction and sentence demonstrate the Department’s commitment to the investigation and prosecution of such betrayals by clearance holders as part of our mandate to protect our citizens and defend the national security of the United States.”

Six former employees of eBay, Inc. have been charged with leading a cyberstalking campaign targeting the editor and publisher of a newsletter that eBay executives viewed as critical of the company. The alleged harassment included sending the couple anonymous, threatening messages, disturbing deliveries – including a box of live cockroaches, a funeral wreath and a bloody pig mask – and conducting covert surveillance of the victims.

EBay Inc.’s former communications chief is “Executive 2” in a federal indictment accusing company employees of cyberstalking a Massachusetts couple, according to two people familiar with the matter. Steven Wymer, who has not been charged with a crime, was EBay’s public-relations chief for about nine months in 2019, when six EBay employees allegedly harassed the proprietors of an e-commerce newsletter that wrote articles about the company. Bloomberg reported Monday that “Executive 1” is former chief executive officer Devin Wenig, who is also referred to in the indictment but not charged with anything. Wymer allegedly sent a text to Wenig in April of last year saying, “We are going to crush this lady” after the newsletter published a story about Wenig’s compensation, according to the indictment. Those texts preceded an alleged cyberstalking campaign that included sending the couple live cockroaches, a funeral wreath, a bloody pig Halloween mask and a book on surviving the death of a spouse. Federal prosecutors claim former EBay employees James Baugh and David Harville led the elaborate campaign. Four other former EBay employees were also charged.

Russell Richardson, former DeKalb Medical Center, Inc. (DeKalb Medical) Director of Security, has pleaded guilty to fraudulently using hospital funds to acquire multiple handguns that he then sold for his personal benefit and financial gain. “Richardson abused his position at the hospital, and manipulated the system for personal profit,” said U.S. Attorney Byung J. “BJay” Pak.  “His actions diverted hospital funds that could have been used to purchase critical medical supplies.” “Richardson violated the trust placed in him as the Director of Security at DeKalb Medical Center,” said Arthur Peralta, Special Agent in Charge of ATF in Atlanta.  “Even worse, Mr. Richardson fraudulently obtained and sold guns without any concern as to who they were being sold to or where they would ultimately end up.”

Beware Rogue Employees with a Taste for Fraud

As if more evidence were needed, a recent Department of Justice (DOJ) indictment provides another reminder of the importance of an effective compliance program—and the potential costs to contractors if their program doesn’t prevent fraudulent actions by individual employees. Last week, the DOJ announced it has entered into a non-prosecution agreement (NPA) with Alutiiq International Solutions LLC (AIS), a subsidiary of Afognak Native Corporation (Afognak) and an Alaskan Native Corporation. AIS has agreed to pay over $1.25 million to resolve an investigation into a kickback and fraud scheme perpetrated by a former AIS manager on a U.S. government contract administered by the General Services Administration (GSA). In addition, AIS and Afognak have agreed to cooperate with the government’s ongoing investigation and prosecution of individuals, and to report to the department evidence of allegations of violations of U.S. fraud, anti-corruption, procurement integrity, and anti-kickback laws. They have also committed to enhance their compliance program and internal controls, where necessary and appropriate, to ensure they are designed to detect and deter, among other things, fraud and kickbacks in connection with U.S. federal government contracts.

On Wednesday, a California court dismissed an intellectual property (IP) theft lawsuit against Chinese mixed reality company Nreal filed by a former employer of its founder, according to court documents sent by Nreal to TechNode. US-based rival Magic Leap accused Nreal founder Xu Chi of stealing MR glasses technology while working there. Why it matters: The Nreal-Magic Leap lawsuit is the latest in a series of IP theft accusations against Chinese-born former employees of American companies. Magic Leap is backed by Alibaba and Google. It built the contested product, a set of mixed reality glasses, in seven years, using $2 billion in investment.

A Harvard University professor pleaded not guilty on June 16 to charges that he lied to US authorities about his ties to a recruitment program run by the Chinese regime and funding he received from the Chinese government for research. Charles Lieber, the former chair of Harvard’s chemistry and chemical biology department, pleaded not guilty to making false statements during a video conference held before a federal magistrate judge in Boston. Marc Mukasey, his lawyer, said Lieber, 61, will fight the charges and that the “government has this wrong.” Lieber’s case is one of the highest-profile to emerge from a U.S. Justice Department crackdown on Chinese influence within universities amid concerns about spying and intellectual property theft by the Chinese regime.

For an American Convicted of Espionage in Russia, a Trade for an Arms Dealer May Be the Quickest Road to Freedom

Almost as soon as American Paul Whelan was sentenced Monday to 16 years on espionage charges in Moscow, questions turned to the possibility of exchanging the former Marine for one or more Russians imprisoned in the U.S. “I’m in no position to discuss a prisoner exchange,” U.S. Ambassador to Russia John Sullivan said in response to a question from a journalist after the verdict was announced. “What we’re looking for is not an exchange; we’re looking for justice for Paul.” However, despite Sullivan’s comments, Russian officials have been floating the possibility of trading the 50-year-old practically since he was arrested in December 2018 while traveling for a wedding and visiting friends in Moscow. He has been imprisoned in Moscow since his arrest.

Postbank says employees printed its master key at one of its data centers and then used it to steal $3.2 million. Postbank, the banking division of South Africa’s Post Office, has lost more than $3.2 million from fraudulent transactions and will now have to replace more than 12 million cards for its customers after employees printed and then stole its master key. The Sunday Times of South Africa, the local news outlet that broke the story, said the incident took place in December 2018 when someone printed the bank’s master key on a piece of paper at its old data center in the city of Pretoria. The bank suspects that employees are behind the breach, the news publication said, citing an internal security audit they obtained from a source in the bank. The master key is a 36-digit code (encryption key) that allows its holder to decrypt the bank’s operations and even access and modify banking systems. It is also used to generate keys for customer cards.

Categories: Insider Threat Cases | Tags: case studies, Insider Risk Management, and itmg
This entry was posted on Monday, June 22nd, 2020 at 11:25 am. Both comments and pings are currently closed.