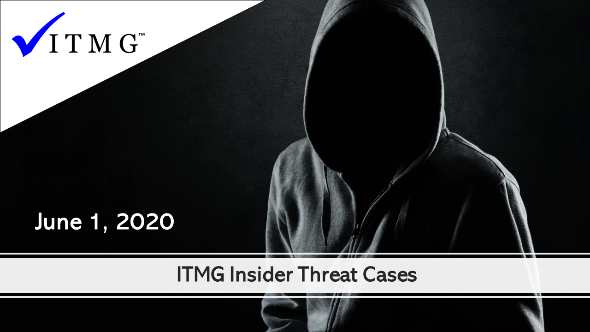 A former IT administrator for an Atlanta-based building products distribution company has been sentenced to 18 months in federal prison after he sabotaged the firm by changing router passwords and shutting down a critical command server, according to the U.S. Justice Department. After resigning from his job in July 2018, Charles E. Taylor of Jacksonville, Arkansas, caused more than $800,000 in damage to his former firm, which had to replace several routers and rebuild and restore its internal computer network, according to the U.S. Attorney’s Office for the Northern District of Georgia, which oversaw the case.

Scientist, Hongjin Tan, Sentenced for Theft Of U.S. Trade Secrets; To Be Deported Back To China After Serving Two Year Prison Sentence

When scientist Hongjin Tan resigned from the Oklahoma petroleum company he’d worked at for 18 months, he told his superiors that he planned to return to China to care for his aging parents. He also reported that he hadn’t arranged his next job, so the company agreed to let him to stay in his role until his departure date in December 2018. But Tan told a colleague a different story over dinner. That conversation prompted Tan’s employer to ask him to leave the firm immediately—and then his employer made a call to the FBI tip line to report a possible crime. The resulting investigation led to Tan’s guilty plea and 24-month prison sentence for stealing proprietary information that belonged to his company. Tan’s theft of a trade secret—one worth an estimated $1 billion—is an example of what the FBI says is a systematic campaign by the Chinese government to gain economic advantage by stealing the innovative work of U.S. companies and facilities. One of that firm’s most innovative products was a battery technology that employees had spent decades researching and developing. The technology also has a secondary, and perhaps even more valuable, use in melting metal.

Russian prosecutors asked a Moscow court on Monday to sentence former U.S. Marine Paul Whelan to 18 years in prison on espionage charges, wrapping up a high-profile trial that has put additional pressure on the country’s relations with Washington. Whelan, 50, was arrested at a central Moscow hotel in December 2018. Investigators claim he was caught red-handed after receiving a USB drive containing classified information. Whelan, who also holds British, Irish and Canadian citizenship, has insisted throughout the trial that he was framed by the Federal Security Service (FSB) agent who gave him the drive.

The Justice Department’s arrest of Simon Saw-Teong Ang, an engineering professor at the University of Arkansas, for wire fraud earlier this month ratcheted up a long-running confrontation with China over a controversial scholarship program. What’s happening: Ang’s indictment was related to his failure to disclose the extent of his ties to China’s 1000 Talents Program, an initiative of the Chinese government to encourage U.S. scientists and researchers to share technical know-how and innovations with Chinese universities and businesses.

The Federal Reserve’s Board of Governors has banned a former Regions Bank employee who pleaded no contest to stealing more than $100,000 from one of the company’s customers to pay off the mortgage of another, the agency announced Thursday. An investigation by Regions found that Matthew Curtis stole more than $110,000 and used those funds to pay off the private mortgage of another Regions customer, according to Federal Reserve documents. Curtis did not appear to have a connection to the mortgage holder, the documents claimed. The mortgage holder actually had the mortgage denied by Regions but Curtis altered loan documents to make it appear that the mortgage was approved.

The SEC says William Sadleir defrauded a BlackRock fund by using money it had invested in Aviron for personal expenses including a Beverly Hills mansion. The founder and former CEO of movie distributor Aviron Pictures has been charged with a $25 million fraud for illegally transferring money from a BlackRock investment fund to a sham company and using some of it to support his lavish lifestyle.The U.S. Securities and Exchange Commission said William Sadleir, who was forced out of Aviron in January, misappropriated funding from the BlackRock Multi-Sector Income Trust (BIT) that was supposed to be used for purposes related to the distribution of films. “We allege that Sadleir raided millions from BIT and its investors, and rather than using those funds for investment purposes he spent them lavishly on himself,” Adam Aderton, co-chief of the SEC Enforcement Division’s asset management unit, said in a news release.

The Court of Appeals for the Second Circuit held yesterday that a securities-fraud plaintiff cannot establish corporate scienter without pleading facts showing that employees who allegedly knew of underlying corporate misconduct had some connection to the corporation’s purportedly false or misleading public statements. The decision in Jackson v. Abernathy should prevent securities plaintiffs from establishing “collective” or corporate scienter in the absence of factual allegations showing a corporate speaker’s awareness of the underlying alleged misconduct even if other employees not involved with the corporation’s disclosures purportedly had such knowledge.