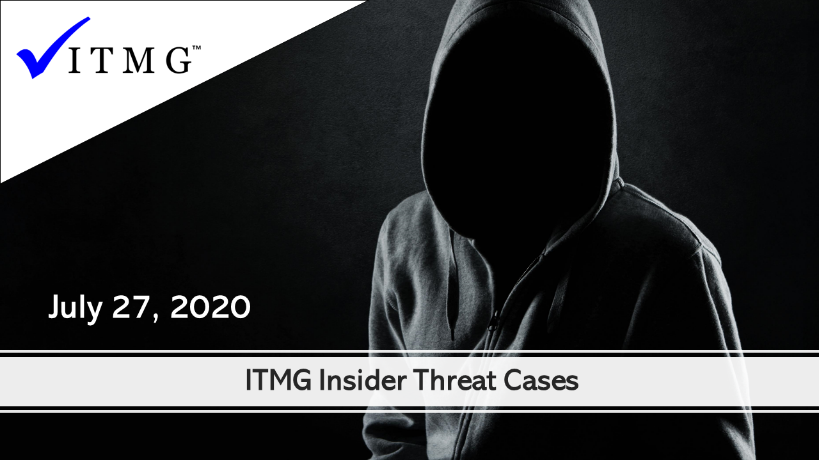 US orders China to close consulate in Houston. The Chinese consulate in San Francisco is harboring a biology researcher who falsely denied connections to the Chinese military to obtain a visa and gain access to the country, according to court documents filed by the FBI. The filing came as part of a document that cited a slew of other episodes in which Chinese nationals allegedly lied on their visa applications by hiding their military connections. Axios’ Bethany Allen-Abrahimian broke the story. Tang Juan, a researcher at the University of California, Davis, stated on her J-1 visa application that she “had never served in the military, but open source investigation revealed photographs of her in the uniform of the Civilian Cadre of the PLA [People’s Liberation Army], and that she had been employed as a researcher at the Air Force Military Medical University, which is another name for FMMU [Fourth Military Medical University],” the FBI claimed.

Federal Agent and Alleged Accomplice Charged in Miami Federal Court with Conspiring to Distribute Drugs, Obstruct Justice, and Lie to the FBI

South Florida federal prosecutors have charged Hialeah residents Alberico Ahias Crespo, 45, and Jorge Diaz Gutierrez, 65, with conspiring to distribute Oxycodone, obstruct justice, and make false statements to the FBI. Crespo is a Special Agent with the Department of Health and Human Services, Office of Inspector General (HHS-OIG), who, during the time of the alleged crimes, worked as part of the South Florida Health Care Fraud Strike Force. Crespo allegedly used his position as an agent to both advance the drug distribution crimes and impede related federal health care fraud investigations, including investigations on which Crespo himself worked.

A former Raytheon systems engineer was sentenced today for illegally retaining national defense information. The defendant retained 31,000 pages of information that was marked as classified, some of which pertained to U.S. missile defense and was classified at the SECRET level, and altered or obliterated the classification markings on documents. Ahmedelhadi Yassin Serageldin, 67, of Sharon, was sentenced by U.S. District Court Judge Patti B. Saris to 18 months in prison, one year of supervised release and ordered to pay a fine of $10,000. In December 2019, Serageldin pleaded guilty to one count of willfully retaining national defense information. Serageldin was a systems engineer at Raytheon Technologies in Massachusetts from August 1997 until he was terminated in May 2017. Serageldin had a SECRET level security clearance in order to complete his assignments on several defense contracts for the U.S. government involving military radar technology.

Multiple employees have left for the EV startup with confidential documents, Tesla claims. Tesla says it has discovered a “disturbing pattern” of former employees who took confidential information and trade secrets on their way to new jobs at EV startup Rivian, according to a new lawsuit first reported by Bloomberg. Tesla even claims Rivian is “knowingly encouraging” this behavior, and it is seeking unspecified punitive damages for what it alleges is “despicable, wanton, oppressive, willful, malicious, [and] duplicitous” conduct. Rivian calls the allegations “baseless.” Rivian is perhaps the richest EV startup in the world, having raised more than $5 billion in the last year and a half. It’s slated to start delivering a premium electric pickup truck in early 2021, ahead of when Tesla’s Cybertruck is supposed to hit the road. The company will also start selling an electric SUV at the same time. Rivian has hired some 2,400 employees ahead of this launch from top-flight companies across the automotive and tech industries, including 178 former Tesla workers, according to the lawsuit, with 70 making the jump directly.

Ex-Employee of Howard Pleads Guilty to Stealing Nearly $140,000 From University

Howard ex-employee pleads guilty to fraud. A former top director of Howard University’s bursar’s office pleaded guilty Friday to stealing nearly $140,000 from the university. Doemini Mosley, 35, pleaded guilty to one count of conspiracy to commit wire fraud in U.S. District Court. As part of the plea agreement with federal prosecutors, Mosley faces 10 to 24 months in prison and must pay nearly $140,000 in restitution as well as an additional $86,000 in forfeiture funds. Mosley worked at Howard from 2011 through 2017, initially in the university’s financial aid office and then as associate director of the university’s bursar’s office. An ongoing investigation by the FBI’s Washington office determined that Mosley conspired with another employee of Howard’s financial aid office to steal from the university, the government said.

Eagle County prosecutors say Ron Braden spent the last six years of his 24-year career as Vail’s information technology director embezzling funds from the town. Braden faces numerous counts, including embezzlement, official misconduct and cyber crimes for allegedly stealing $854,915 between 2012 and 2018. Prosecutors for the Fifth Judicial District (which includes Eagle County) allege Braden used his position as Vail’s IT director to steer inflated contracts to companies controlled by a long-time friend named Eric Nastri. The arrest affidavit for the two men states, “Nastri kicked back 87% of the funds…to Branden.” Assistant District Attorney Heidi McCollum told the Problem Solvers the two men were involved in a “billing and invoicing scheme where their own personal companies were set up to really accept the money from one to the other and ultimately into their own personal bank accounts.”

John Demers, assistant attorney general for national security, announces a law enforcement case involving China in November 2018. The Justice Department is prosecuting more alleged cybercrime cases. The Justice Department announced charges Tuesday against two suspected Chinese hackers who allegedly targeted U.S. companies conducting COVID-19 research, part of what the government called long-running efforts to steal American trade secrets and intellectual property. The 11-count indictment accuses the defendants, Li Xiaoyu and Dong Jiazhi, of conducting a hacking campaign that has targeted companies, nongovernmental organizations as well as Chinese dissidents and clergy in the United States and around the world. Prosecutors said Li and Dong’s efforts, which began as early as 2009 and are still going on, stole intellectual property and trade secrets worth hundreds of millions of dollars.

Jun Wei Yeo, also known as Dickson Yeo, entered a plea of guilty today to one count of acting within the United States as an illegal agent of a foreign power without first notifying the Attorney General, in violation of 18 U.S.C. § 951.  Yeo’s plea was entered via videoconference before the Honorable Tanya S. Chutkan in the U.S. District Court for the District of Columbia. “The Chinese Government uses an array of duplicity to obtain sensitive information from unsuspecting Americans,” said Assistant Attorney General for the Justice Department’s National Security Division John C. Demers.  “Yeo was central to one such scheme, using career networking sites and a false consulting firm to lure Americans who might be of interest to the Chinese government.  This is yet another example of the Chinese government’s exploitation of the openness of American society.”

Justin Herdman, United States Attorney for the Northern District of Ohio, announced today that a federal grand jury sitting in Cleveland has returned a eighteen-count indictment charging Joseph A. Cipolletti, age 45, of Hudson, with wire fraud, money laundering, bank fraud, and making a false statement under oath. “This defendant is accused of embezzling thousands of dollars from hardworking Northeast Ohio families, intended to provide their children and students with meaningful educational experiences, for his own personal use – such as buying vehicles and backyard renovations,” said U.S. Attorney Justin Herdman. “As a result of the defendant’s alleged actions, his place of business was forced into bankruptcy, and our community’s schoolchildren were deprived of invaluable experiences and memories.”

A federal grand jury sitting in Austin has returned a six-count indictment against a 31-year-old paralegal specialist with the U.S. Attorney’s Office (USAO) for the Western District of Texas, announced U.S. Attorney Ryan K. Patrick of the Southern District of Texas. Jennifer Loya is charged with drug trafficking crimes, conspiring to obstruct justice and making a false statement to federal law enforcement officers.  Also charged are Roland Gustamante, 30, his wife Kimberly Loya, 27, and Nathan Lopez, 27. All are from San Antonio. Gustamante allegedly imported drugs from Mexico, sold them in the San Antonio area and transported proceeds back to suppliers in Mexico. Kimberly Loya served as a courier for Gustamante’s drug trafficking organization, according to the indictment, while Lopez was an associate of the Gustamante drug trafficking organization. Jennifer Loya is Kimberly’s sister.

Defendant admitted lying about sharing bid information. A former official at Fort Gordon has been sentenced to federal prison for lying to investigators about his disclosure of confidential information used to award competitive bids. Vaughn Moffett, 63, of Sharpsburg, Ga., was sentenced to 20 months in prison and fined $15,000 by U.S. District Court Chief Judge J. Randal Hall after pleading guilty to False Statement or Representation Made to a Department or Agency of the United States, said Bobby L. Christine, U.S. Attorney for the Southern District of Georgia. After completion of his sentence, Moffett will serve three years of supervised release. There is no parole in the federal system. According to information provided in court documents and proceedings, Moffett, as deputy director of the U.S. Army Signal Network Enterprise Center (NEC) at Fort Gordon, used his access to contract bid and proposal information to assist the Communications Research, Engineering and Consultants (CREC) Group with winning a contract for upgrading the Army’s communications infrastructure at Fort Gordon in 2014. When investigators later questioned Moffett, he falsely and fraudulently denied knowing how CREC was awarded the contract.