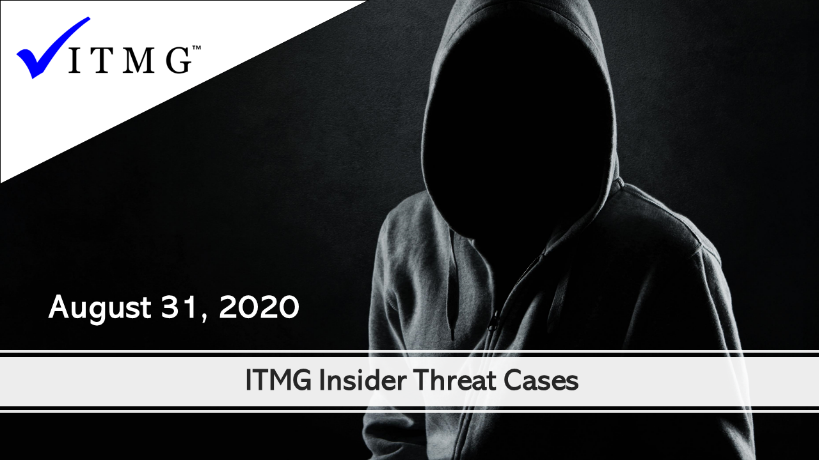 A one-time Cisco engineer has pleaded guilty to causing $1.4 million in damages to his former employer by deleting hundreds of virtual machines, which disrupted nearly 16,000 WebEx customer accounts for weeks, according to the U.S. Justice Department. Sudhish Kasaba Ramesh, 30, pleaded guilty this week to one charge of intentionally accessing a protected computer without authorization and recklessly causing damage this week, according to the U.S. Attorney’s Office for the Northern District of California, which is overseeing the case. Under Justice Department guidelines, Ramesh could face up to five years in federal prison and a $250,000 fine, although his sentence is likely to be lower after pleading guilty. He remains free on $50,000 bond, according to the Justice Department.

On August 25, the Department of Justice announced the arrest of Egor Igorevich Kriuchkov, a citizen of Russia, for conspiring to breach the network of Tesla operations in Sparks, NV and introduce malware into the company’s network. Kriuchkov was arrested on August 22 as he tried to depart Los Angeles for Russia, and has been detained pending trial. Unpacking the criminal complaint filed by the FBI Las Vegas Field office, it is clear this isn’t an ordinary attempt to infuse malware into a company’s network, but rather an effort led by a well-financed and logistically nimble organization. While the insider’s identity is not known, we do know that the insider is the hero of this tale. We are able to deduce from the court documents that the insider is a Russian speaking, non-U.S. citizen working in Sparks, NV who has direct access to the organization’s computer network. When approached, the insider listened and then took appropriate action. He reported the approach to the company, and the company quickly contacted the FBI. The FBI stepped in and obtained the cooperation of the employee.

Swiss federal prosecutors on Thursday filed an indictment against well-known Swiss businessman Hans Ziegler for insider trading, corporate espionage and accepting bribes. The charges again Ziegler come after he was previously ordered by Swiss financial market supervisor FINMA to pay 1.4 million Swiss francs ($1.5 million) in 2017 for “repeated and systematic” insider trading. The attorney general’s office (OAG) said Ziegler – known for decades in Swiss business as a board director at several companies and with expertise in helping restructuring efforts – along with multiple instances of insider trading had also exchanged insider information for a bribe on the sale of a subsidiary of a company where he worked. “Hans Ziegler, as a member of the board of a company, between the end of 2013 and November 2016 on several occasions disclosed trade secrets to the second accused,” the OAG said in a statement, adding he had received 150,000 francs after the sale.

A senior ConocoPhillips employee tricked the oil company into paying more than $3 million to a business owned by his friend, an Anchorage police officer, for work that was never performed and materials that were never received. That’s according to wire fraud charges federal prosecutors filed Wednesday against Forrest Wright and Nathan Keays. Wright had been a senior drilling and wells planner at Conoco, and Keays is a K9 officer with the Anchorage Police Department. Wright resigned following a civil lawsuit Conoco filed in December to get back its money. The Anchorage Police Department put Keays on paid leave in December after learning of the allegations. In a statement, a police spokesperson said Keays was put on unpaid administrative leave Thursday.

Federal prosecutors have filed charges against four former Washington Federal Bank for Savings employees for an alleged multiyear, $29 million embezzlement scheme that preceded the Bridgeport bank’s sudden 2017 failure. The indictment, filed Thursday in Chicago federal court, charges Rosallie Corvite, 45, of Chicago, the bank’s chief financial officer; Jane Iriondo, 39, of Boise, Idaho, its corporate secretary; Alicia Mandujano, 49, of Chicago, a loan servicer; and Cathy Torres, 39, of Chicago, a loan officer, with conspiracy to commit embezzlement and falsify bank records. The indictment alleges the four conspired with Robert Kowalski, 58, of Chicago, an attorney and former bank customer, who was indicted last year on bankruptcy fraud charges as part of an ongoing criminal investigation into the bank’s collapse.

A Texas A&M professor and NASA research team leader was arrested Sunday and charged with having hidden connections to Chinese state-owned enterprises and government programming, according to the Department of Justice. Zhengdong Cheng allegedly received funding and accessed sensitive information about NASA projects on the basis of false information he submitted to his university and NASA regarding his relationship with Beijing-backed institutions. One such institution, the Thousand Talents Program, has faced accusations of intellectual property theft. “Once again, we have witnessed the criminal consequences that can arise from undisclosed participation in the Chinese government’s talent program,” said Assistant Attorney General for National Security John C. Demers. “Professor Cheng allegedly made false statements to his university and to NASA regarding his affiliations with the Chinese government.  The Department of Justice will continue seeking to bring participation in these talent programs to light and to expose the exploitation of our nation and our prized research institutions.”

A Chinese national and researcher at the University of California, Los Angeles has been arrested on federal charges of destroying evidence to obstruct an FBI investigation after he was observed throwing a damaged hard drive into a dumpster outside his apartment, the Justice Department announced today. Guan Lei, 29, of Alhambra, was arrested pursuant to a one-count criminal complaint unsealed this afternoon during his initial appearance in United States District Court. The criminal complaint alleges that Guan, who was in the U.S. on a J-1 non-immigrant visa, threw a damaged hard drive into a trash dumpster near his residence on July 25. The FBI recovered the damaged hard drive after Guan was not allowed to board a flight to China and after Guan refused the FBI’s request to examine his computer. The affidavit in support of the complaint notes that the internal hard drive “was irreparably damaged and that all previous data associated with the hard drive appears to have been removed deliberately and by force.”

St. Louis, MO –Tammy Fox, 49, of Carrolton, Illinois, was sentenced today to twenty months’ imprisonment by United States District Court Judge Audrey Fleissig after pleading guilty to 2 counts of wire fraud related to her former position as Office Manager of Explosive Professionals Midwest, Incorporated, also known as ExPro Midwest.  Fox was also ordered to make restitution to the victim company in the amount of $402,213.76. According to the Indictment and Plea Agreement, Fox served as the Office Manager for ExPro Midwest in St. Louis County, Missouri.  From January, 2011 through February, 2018 Fox schemed to steal approximately $420,000 from the company.  During that time, Fox issued approximately 215 unauthorized ExPro Midwest checks to herself, which she deposited into her personal bank account.

Haizhou Hu, a Chinese national conducting research at the University of Virginia, was arrested today and charged via criminal complaint with a pair of federal crimes just days after he attempted to board a flight to China. United States Attorney Thomas T. Cullen and David W. Archey, Special Agent in Charge of the FBI’s Richmond Division announced the arrest. Hu, 34, is charged with accessing a computer without authorization, or exceeding authorization to obtain information from a protected computer and theft of trade secrets. According to court documents, investigators first became aware of Hu, who is in the United States conducting research studying bio-mimics and fluid dynamics at the University of Virginia, on August 25, 2020 when he attempted to board a flight to China at Chicago’s O’Hare International Airport. A routine screening conducted by authorities revealed that Hu was alleged to be in possession of bio-inspired research simulation software code that he was not authorized to possess, and which represented the result of years of research and resources in its development by members of the University of Virginia academic community.

Categories: Insider Threat Cases | Tags: cases, Insider Risk Management, and itmg
This entry was posted on Monday, August 31st, 2020 at 11:08 am. Both comments and pings are currently closed.