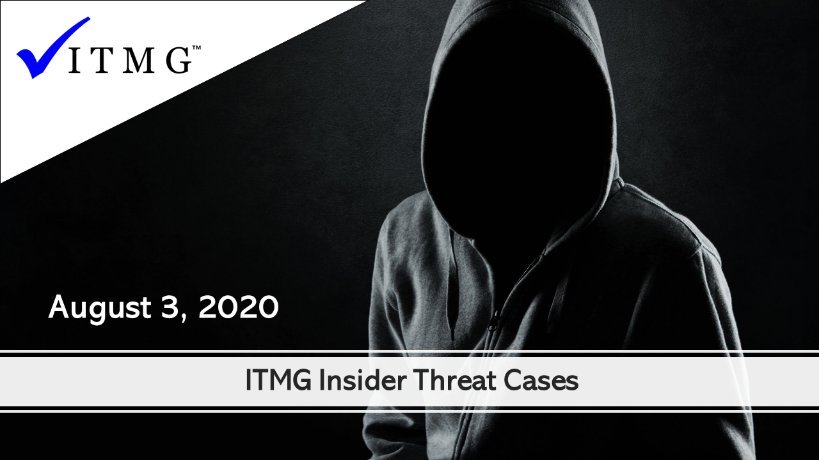 Former Ohio woman Li Chen, 46, pleaded guilty today via video conference in U.S. District Court today to conspiring to steal scientific trade secrets and conspiring to commit wire fraud concerning the research, identification and treatment of a range of pediatric medical conditions. “Once again we see the People’s Republic of China (PRC) facilitating the theft of our nation’s ingenuity and hard work as part of their quest to rob, replicate and replace any product they don’t have the ability to develop themselves,” said John C. Demers, Assistant Attorney General for National Security.  “Far from being an isolated incident, we see the PRC implicated in around 60 percent of all trade secret theft cases.  This continued economic belligerence runs contrary to the values and norms that facilitate the success of our industries and countering it remains among our highest priorities.”

As Twitter and law enforcement agencies investigate the high profile attack that saw a number of public figures’ accounts hacked to spew out a cryptocurrency scam, there is a clear lesson for other businesses to learn. As Reuters reports, as of earlier this year, in excess of 1000 Twitter staff and external contractors had access to an internal system that allows access to any account, and passwords to be reset. It was this system that hackers abused to break into accounts belonging to the likes of presumptive US Presidential Candidate Joe Biden, former US President Barack Obama, Elon Musk, Jeff Bezos, Kanye West, and scores of others, as well as Twitter accounts owned by firms such as Apple, Coinbase, and Uber. According to Reuters, former Twitter employees claim that “too many people”, including some at contracting firms such as Cognizant, had access to the internal tool – and even if those 1000+ people didn’t abuse it themselves, they were potentially targets for social engineering attacks by hackers eager to exploit the access.

Two Southern Tier staffing agencies are locked in a bitter dispute alleging corporate espionage, payroll sabotage, the breaching of non-compete and non-disclosure agreements, and the hijacking of a company Facebook page. In a 54-page filing with the Federal District Court in Northern District earlier this month, Adecco accuses the upstart Staffworks of raiding its Corning, Elmira, Utica and Syracuse staff to steal proprietary account information and using it to steal long-established business. Named in the suit are seven former Adecco employees and the Staffworks founder, all of whom are accused of a concerted scheme to aid a competitor at Adecco’s expense. Adecco, one of the world’s largest staffing firms, says it “has and will continue to suffer damages, irreparable harm” from the actions of the defendants and asks the court to prevent those named in the suit from working at Staffworks and for financial damages, the lawsuit states.ty does not disqualify a technology company from obtaining a legal victory under the “unclean hands” doctrine. San Francisco-based Rearden LLC accused a former employee of its subsidiary Rearden MOVA of illegally selling its MOVA Countour “facial performance motion capture” technology to a Chinese company in 2012. Years later in February 2015, another Chinese corporation called Shenzhenshi Haitiecheng sued Rearden in San Francisco federal court, claiming it legally acquired the MOVA assets from that employee, Greg LaSalle, in May 2013. Shenzhenshi later granted a China and India-owned company, Digital Domain 3.0, or DD3, an exclusive license to use the patents.

The Bank of San Antonio and a subsidiary are accusing a former top-level employee of forging documents, arranging kickbacks, and swindling the company out of millions of dollars. Officials of the bank and subsidiary Texas Express Funding (TEF) said they discovered what they called a “Ponzi-style fraud scheme” in May, resulting in losses of $13.2 million. After learning of the alleged fraudulent activity, bank officials notified the FBI and banking regulators. The Bank of San Antonio formed TEF last year as a subsidiary specializing in receivables financing. But in a lawsuit filed Tuesday, the bank alleges TEF’s former president, Wayne Schroeder, fraudulently induced the bank to purchase millions of dollars of worthless accounts receivables from various businesses.

Dr. James Patrick Lewis, of Fairview, West Virginia, was sentenced today to three months incarceration for a fraud charge involving West Virginia University, the Department of Justice announced. Lewis was also fined $9,363 for the cost of the incarceration and ordered to pay $20,189 in restitution to WVU, which is paid in full. Lewis, age 54, pleaded guilty to a one-count information charging him with “Federal Program Fraud.” From 2006 to August 2019, Lewis was a tenured professor at West Virginia University in the physics department, specializing in molecular reactions used in coal conversion technologies. In July 2017, Lewis entered into a contract of employment with the People’s Republic of China through its “Global Experts 1000 Talents Plan.” China’s Thousand Talents Plan is one of the most prominent Chinese Talent recruit plans that are designed to attract, recruit, and cultivate high-level scientific talent in furtherance of China’s scientific development, economic prosperity and national security. These talent programs seek to lure overseas talent and foreign experts to bring their knowledge and experience to China and reward individuals for stealing proprietary information.

Today, 47-year-old Deanna Bates Wehde of San Antonio admitted to stealing over $470,000 from the company she managed, announced U.S. Attorney John F. Bash and FBI Special Agent in Charge Christopher Combs, San Antonio Division. Appearing before U.S. Magistrate Judge Henry Bemporad, Wehde pleaded guilty to one count of wire fraud and one count of aggravated identity theft.  By pleading guilty, Wehde admitted that while employed by Stone Care of Texas between May 2016 and September 2018, she defrauded the company by using company credit cards issued in the names of former employees for business-related travel to make unauthorized purchases and cash withdrawals for her own personal use and benefit.

Categories: Insider Threat Cases | Tags: case studies, Insider Risk Management, and itmg
This entry was posted on Monday, August 3rd, 2020 at 11:29 am. Both comments and pings are currently closed.