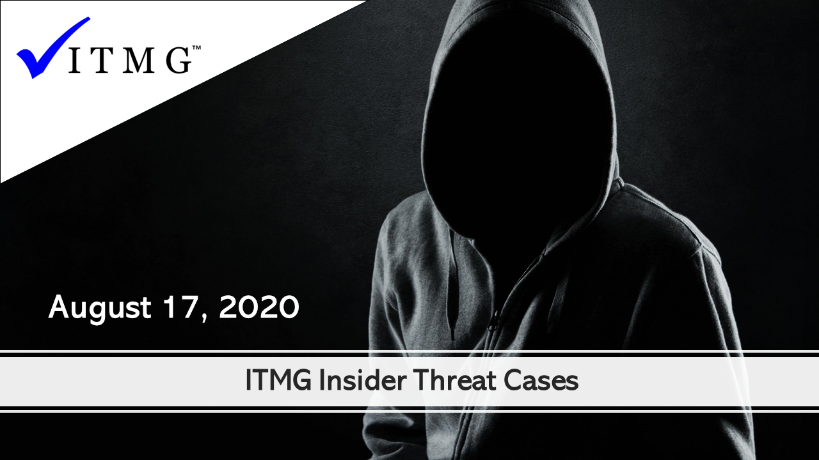 The Chicago-based restaurant chain claims that Easterbrook lied to preserve his severance package. McDonald’s accused ousted CEO Steve Easterbrook of sending nude photos of employees from his company email account to a personal email, in a lawsuit attempting to recover Easterbrook’s multimillion-dollar golden parachute. The Chicago-based restaurant chain says Easterbrook lied to preserve his severance package, which included roughly $40 million in stock-based benefits, upon his firing last year. McDonald’s said its board would never have terminated Easterbrook “without cause,” allowing him to collect the generous severance, had he not allegedly covered up sexual relationships with three employees.

Jacksonville, Florida – United States Attorney Maria Chapa Lopez announces the return of an indictment charging Jason Cory (47, Jacksonville) with three counts of wire fraud and one count of money laundering. If convicted, he faces up to 20 years in federal prison for each count of wire fraud and up to 10 years’ imprisonment for the money laundering offense. The indictment also notifies Cory that the United States is seeking a money judgment of at least $558,701.40, the proceeds of the charged criminal conduct. According to the indictment, Cory was the Chief Executive Officer of an information technology services company. From approximately March 2017 through March 2019, Cory embezzled $547,071.10 from the company by authorizing and directing wire transfers out of its corporate accounts to an entity named Gambit Matrix LLC (Gambit). Cory informed employees that Gambit had performed consulting services for the company, when in reality, Gambit was a shell company controlled by Cory.

Trump Says He Is Considering Pardon for Leaker Edward Snowden

President Donald Trump said on Saturday he is considering a pardon for Edward Snowden, the former U.S. National Security Agency contractor – now living in Russia – whose spectacular leaks shook the U.S. intelligence community in 2013. The Republican president’s comments followed an interview (https://nypost.com/2020/08/13/trump-a-lot-of-people-think-edward-snowden-not-being-treated-fairly) Trump gave to the New York Post this week in which he said of Snowden that “there are a lot of people that think that he is not being treated fairly” by U.S. law enforcement. U.S. authorities for years have wanted Snowden returned to the United States to face a criminal trial on espionage charges brought in 2013.

Tyler C. King, age 31, of Dallas, Texas, was sentenced today to 57 months in prison for computer fraud and aggravated identity theft in connection with his hacking of a New York-based technology company. United States Attorney Grant C. Jaquith stated: “Tyler King hacked into a major technology company, damaged its systems, stole its data, and laughed about it, all from the comfort of his sofa in Texas.  He will now serve 57 months in federal prison.  Those interested in hiding behind their keyboards to steal information and damage property should take today’s sentence as a stark reminder that computer hacking is a serious business with serious consequences.  I thank the FBI for its exceptional work in bringing King to justice.” The evidence at King’s 5-day trial, in November 2019, established that he conspired with Ashley St. Andria in 2015 to gain access to the computer network of a New York-based technology company that employed St. Andria.  While on the company’s network, King and St. Andria created unauthorized administrator accounts that gave them access to proprietary company information, including real-time access to the emails of senior company executives, personnel files, and financial records.

The prosecution of a Kansas researcher ensnared in a U.S. government crackdown on Chinese economic espionage and trade secret theft opens the door to criminalizing workplace disagreements, his attorneys argued Friday in a motion asking a court to throw out the charges. Feng “Franklin” Tao is charged with not disclosing on conflict-of-interest forms work he was allegedly doing for China while employed at the University of Kansas — something federal prosecutors have portrayed as a scheme to defraud the university, the U.S. Department of Energy and the National Science Foundation.

Security researchers have uncovered a prolific new APT group blamed for at least 26 targeted corporate espionage attacks on global firms since 2018. Dubbed “RedCurl” buy Group-IB, the entity is thought to be Russian-speaking but previous targets were located in Russia, Ukraine, the UK, Germany, Canada, and Norway. Victims hail from a wide variety of industries including insurance, construction, retail, banking, law, finance and even travel agencies. The end goal of attacks appears to be the theft of confidential corporate data such as contracts, financial documents, employee personal records, and information on legal action and facility construction.

Scott C. Blader, United States Attorney for the Western District of Wisconsin, announced today that Sandra Stiner, 65, Ladysmith, Wisconsin, pleaded guilty to wire fraud, aggravated identity theft and criminal asset forfeiture. As part of the plea agreement with the United States, Stiner agreed to waive her right to be charged by indictment by a grand jury.  In these circumstances, federal charges are entered by way of an Information filed with the Court. Stiner worked at the Rusk County Health and Human Services Department (HHS) for 42 years before retiring in January 2019.  While working for HHS, Stiner misappropriated $702,351 during a nine-year time span from June 2010 to January 2019, by creating and submitting fictitious invoices allegedly from a home-based therapy company (R.Y.P.) for nonexistent intensive in-home autism services to two children.

A former employee of the Houston Independent School District has agreed to plead guilty in connection with her involvement in a scheme to use bribery and fraud to facilitate cheating on the ACT and SAT exams. According to the superseding indictment, Williams administered the SAT and ACT exams at the public high school in Houston where she worked. In exchange for bribe payments directed to her by co-conspirators William “Rick” Singer and Martin Fox, and in violation of her duty of honest services to the ACT and the College Board, Williams allowed another co-conspirator, Mark Riddell, to secretly take ACT and SAT tests in place of the children of Singer’s clients or to replace their exam answers with his own corrected answers. Williams then returned the falsified exams to the ACT and College Board for scoring.

Michael T. Mann, age 50, of Saratoga County, New York, pled guilty today to orchestrating a years-long fraud that caused more than $100 million in losses to banks, financing companies, and other businesses. The announcement was made by United States Attorney Grant C. Jaquith and Thomas F. Relford, Special Agent in Charge of the Albany Field Office of the Federal Bureau of Investigation (FBI). Mann operated ValueWise Corporation, based in Clifton Park, New York, as well as subsidiary companies including MyPayrollHR.com LLC.  In pleading guilty, he admitted that from 2013 to September 2019, he engaged in a fraudulent scheme to deceive banks and financing companies into loaning his companies tens of millions of dollars. Because Mann could not repay the loans with legitimate business revenues, he expanded the fraud, by stealing and diverting millions of dollars that were entrusted to his payroll companies, and engaging in the daily kiting of millions of dollars among bank accounts he controlled.

ROMEATRIUS MOSS, 40, a nurse and former Air Force Major stationed at Vance Air Force Base in Enid, Oklahoma, was sentenced today to serve 24 months in prison for health care fraud in which she accepted kickbacks for referring TRICARE beneficiaries to pharmacies furnishing compounded drugs, announced U.S. Attorney Timothy J. Downing.  Moss was also ordered to pay restitution in the amount of $622,459.00. According to a felony information filed on September 30, 2019, Moss solicited and received $73,823.06 in return for referring prescriptions for members of the U.S. military to compounding pharmacies that were reimbursed by TRICARE, a health insurance program for military members.  Because of resulting cost increases and infringement on patient choice, it is a crime to solicit or receive payments for referrals to health care providers for an item or service that could be paid, in whole or in part, by a federal health care program.

Categories: Insider Threat Cases | Tags: case studies, cases, Insider Risk Management, and itmg
This entry was posted on Monday, August 17th, 2020 at 11:18 am. Both comments and pings are currently closed.